Have you seen The Waitress movie? It’s one of my faves and guess what, the Waitress Musical is coming to Dallas this spring! 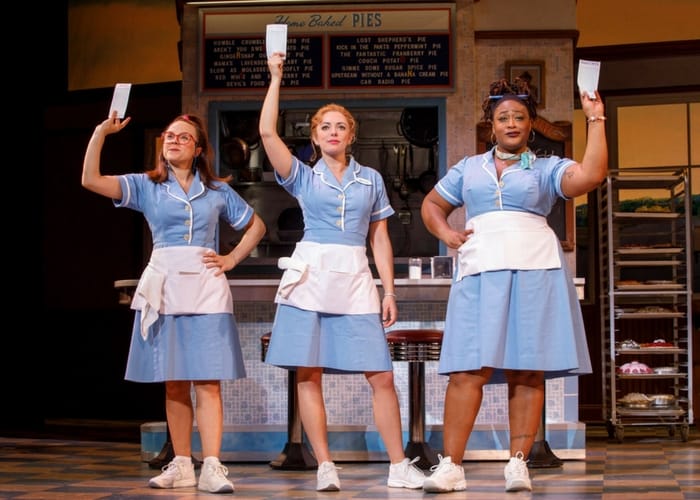 Dallas Summer Musicals welcomes Waitress to the Music Hall at Fair Park for a limited two-week engagement, March 28 – April 8, 2018. (We will be covering opening night, March 28 – so make sure to follow along on social!)

If you aren’t familiar with Waitress, do yourself a favor and watch the movie! The amazing Sara Bareilles wrote the original music and lyrics, so you know it’s going to be amazing.

I’ve been streaming the Waitress soundtrack in preparation for opening night (p.s. it’s free with Amazon Prime!)  Another fun fact, the creative team behind the musical, is all-female! 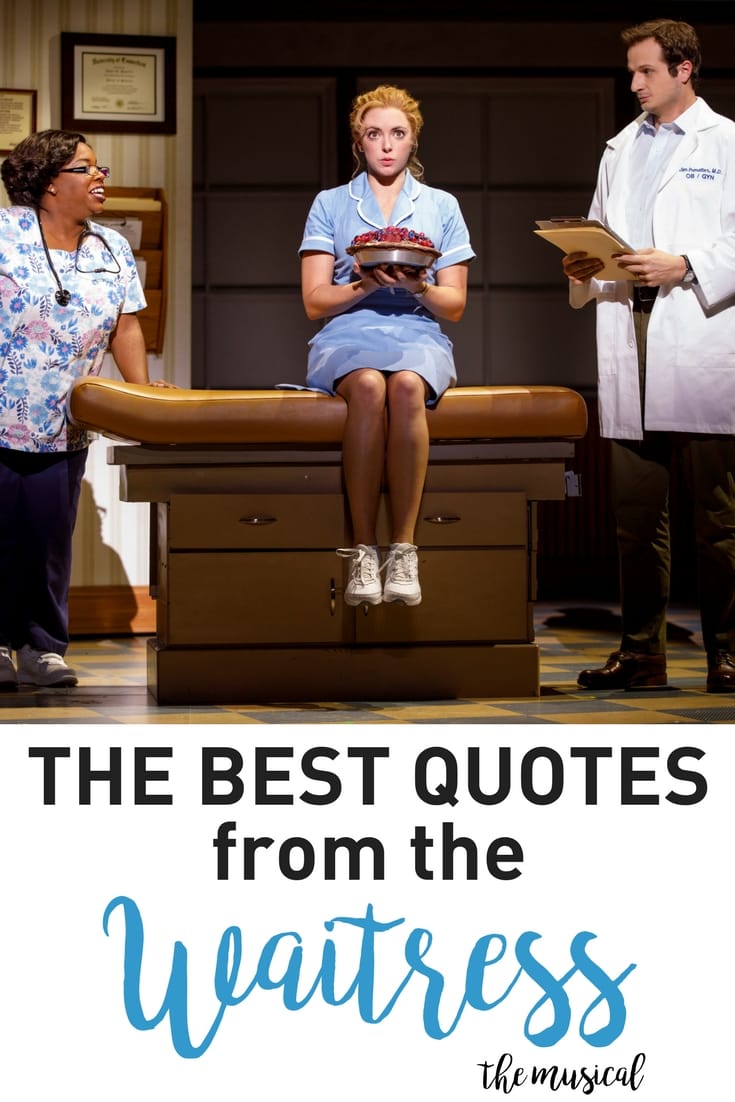 Here are a 7 of my favorite quotes from the Waitress. Feel free to share these on social!

Dreams come and they go, but hold them and keep them and know that you need them. 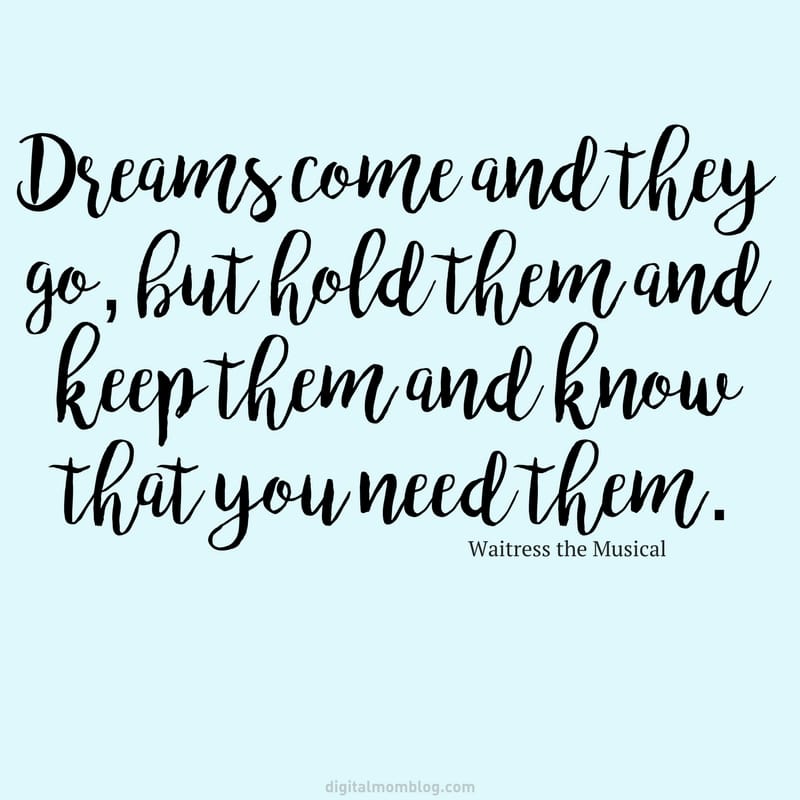 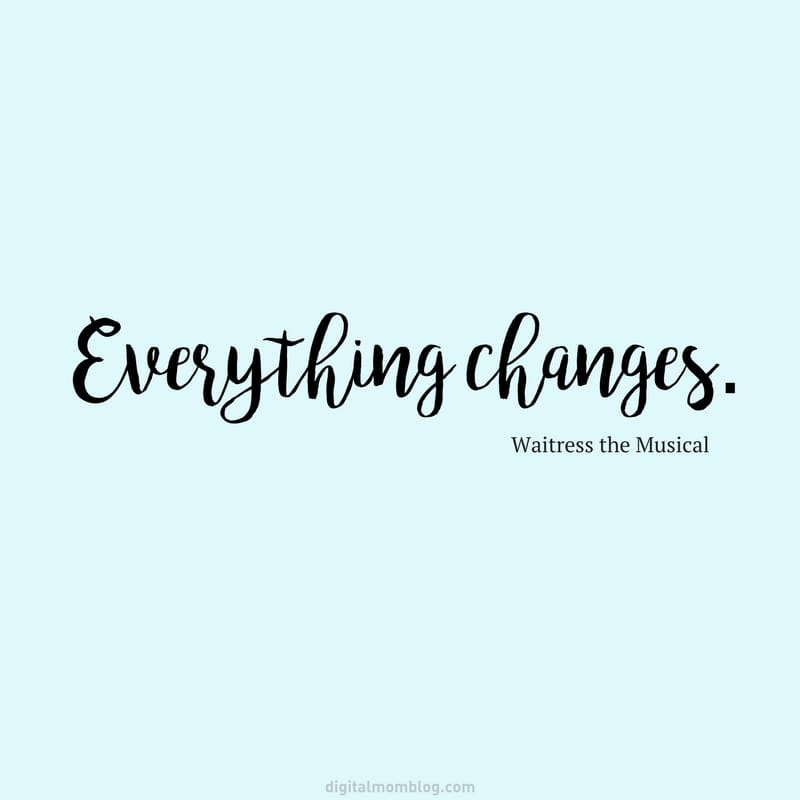 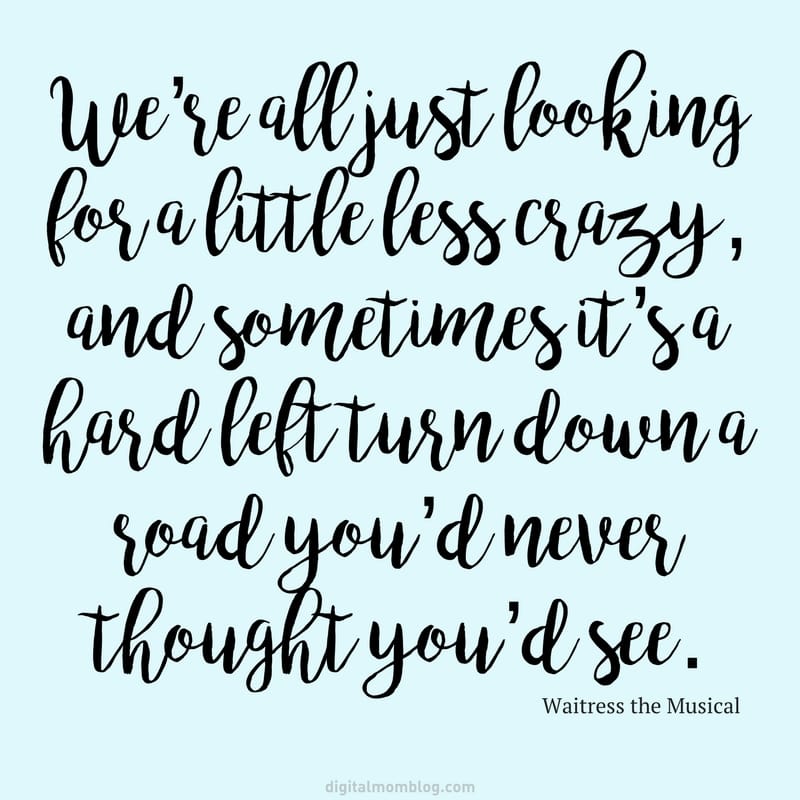 In the blink of an eye, there’s a new life in front of my face, and I know in due time everything will find it’s right place. 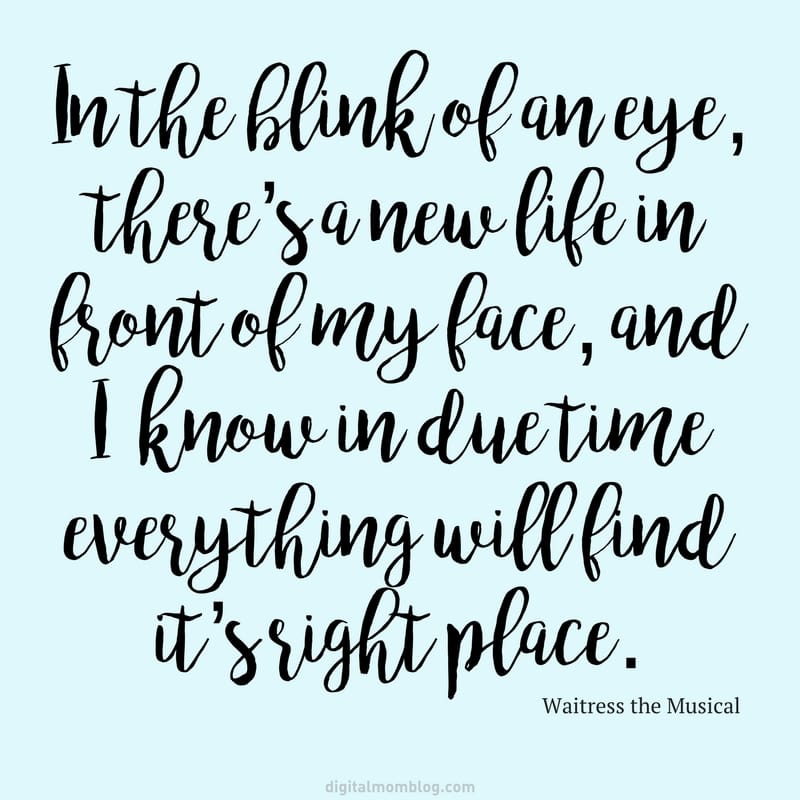 Chance won’t come every single day, so don’t throw it away. 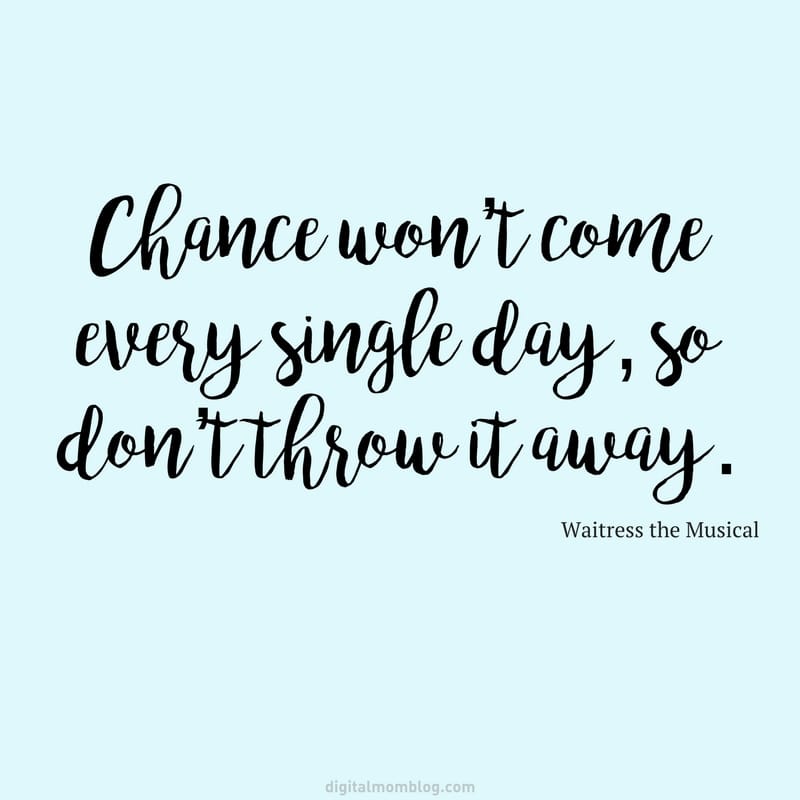 It feels so good to be bad. 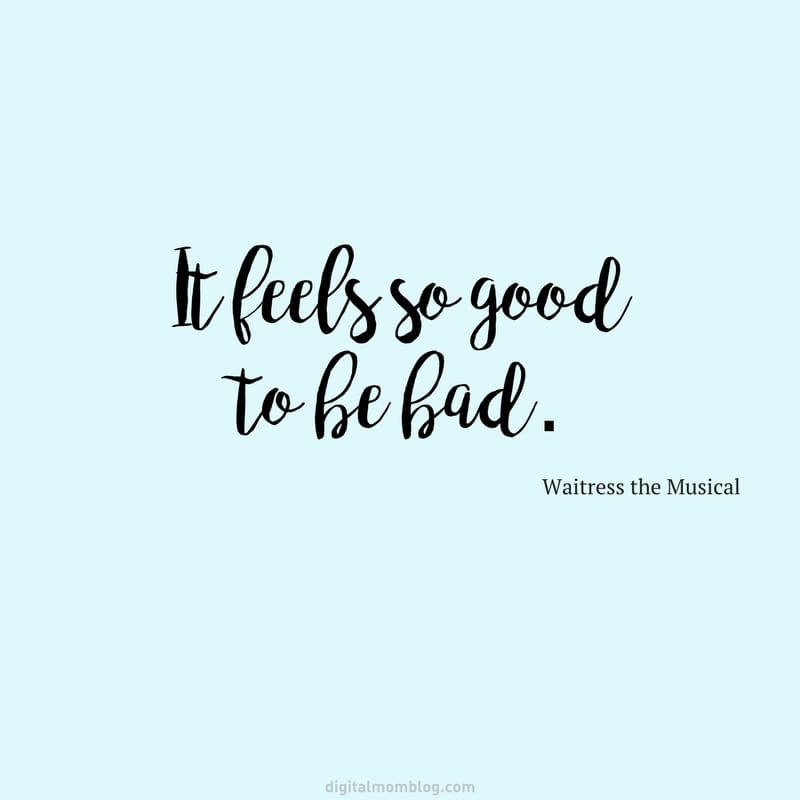 Here are the complete details on the Waitress musical in Dallas. If you are looking for a fun girl’s night out, this is it! I’ll be taking one of my besties! It’s only in Dallas for 2 weeks, so don’t miss this opportunity! Tickets start at just $20 and can be purchased at DallasSummerMusicals.org, by phone at 1 (800) 745-3000 or in person at the Music Hall at Fair Park Box Office Monday through Friday from 10 a.m. to 6 p.m. and Saturday from 10 a.m. to 4 p.m.

Inspired by Adrienne Shelly’s beloved film, Waitress tells the story of Jenna – a waitress and expert pie maker, Jenna dreams of a way out of her small town and loveless marriage. A baking contest in a nearby county and the town’s new doctor may offer her a chance at a fresh start, while her fellow waitresses offer their own recipes for happiness. But Jenna must summon the strength and courage to rebuild her own life.

“It’s an empowering musical of the highest order!” raves the Chicago Tribune. “Waitress is a little slice of heaven!” says Entertainment Weekly and “a monumental contribution to Broadway!” according to Marie Claire. Don’t miss this uplifting musical celebrating friendship, motherhood, and the magic of a well-made pie.

Single tickets for the Dallas engagement of Waitress, starting at $20 (pricing subject to change), are now on sale at DallasSummerMusicals.org or by phone at 1 (800) 745-3000. They can also be purchased in person at the Music Hall at Fair Park Box Office Monday through Friday from 10 a.m. to 6 p.m. and Saturday from 10 a.m. to 4 p.m.

Dallas Summer Musicals 2017-18 season continues with the thrilling, spectacular and unforgettable Les Misérables, April 24-May 6, 2018; Disney’s The Lion King, winner of six Tony Awards®, including Best Musical, June 13-July 7, 2018; the spellbinding sequel to The Phantom of the Opera, Love Never Dies: The Phantom Returns, July 24-August 5, 2018; and closing the season will be the hilarious new musical School of Rock, based on the hit film, August 15-26, 2018.

Dallas Summer Musicals will continue to bring the best of Broadway to North Texas in the 2018-19 season. Joining previously announced Hamilton and Disney’s Aladdin, is Broadway’s most beloved musical, the 2017 Tony Award® winner for Best Revival, Hello, Dolly!; Cameron Mackintosh’s spectacular new production of Andrew Lloyd Webber’s The Phantom of the Opera; the romantic and adventure-filled new musical Anastasia; the legendary story direct from Broadway, Miss Saigon; and a gorgeous new Broadway production of Fiddler on the Roof, directed by Tony winner Bartlett Sher.

DSM and BAA are pleased to welcome back two audience favorites to Dallas as season add-ons to the 2018-19 season subscription. The musical for every-BUDDY, Elf, based on the film of the same name will return to Dallas just in time for the holiday season.

By popular demand, The Book of Mormon, winner of 9 Tony Awards®, including Best Musical, will also return to Dallas for a limited one-week engagement as a season add-on.

In addition, the winner of six 2017 Tony Awards®, including Best Musical, and 2018 Grammy Award® winner Dear Evan Hansen will make its North Texas premiere as part of the Dallas Summer Musicals 2019-20 season.