This past week our dog died. Animal the Pug joined our family 13 years ago. After months of illness, he passed away last Monday. Despite my best attempts to convince my husband to get the dog stuffed, he refused. He said something to the effect of “YOU ARE SICK SICK SICK.” And after this many years, he should know that I am kidding (kind of).

Animal’s death has been extremely sad but expected. Knowing the death is going to happen sooner rather than later is a whole lot easier when the time does come. We really thought our dog Bobo had a few more years in him – but nope, he ended up passing away unexpectedly last year and it was just awful. I mourned, the kids mourned and Animal mourned. Each night for months Animal would cry, then the kids would cry and I would cry. It wasn’t a happy place around here to say the least.

Explaining Death to a Toddler

The toddlers didn’t really get what was going on when we told them. E kept yelling IZAIAH, ANIMAL IS DEAD. Izaiah responded with Animal dead?  And then he ran off and played with his cards.

Fast forward a few days, and it clicked in Izaiah’s mind that Animal wasn’t around. The last few months, Animal would fall asleep here or there. We’d find him under beds, on couches, so for Izaiah not to know where he was wasn’t a big deal – but not seeing him for a few days let him curious.  Izaiah’s questions about Animal’s death were both extremely sad but humorous. I wrote about them on Babble: 6 Questions My Toddler Has About Our Dog’s Death.

Talking About Death With Kids

Last month when we knew Animal’s life was coming to an end soon – we sat the older kids down and talked about death with them. We explained how old Animal was (13) and how old he was in dog years (91). The kids wanted to know if he would be with Bobo in heaven. They wanted to know if he would hurt. Our oldest, Z understood. Our boy E, 8-years-old was heart broken.  Remember at this point, the dog was alive. E felt the need to make a drawing. He drew the below picture. Animal wasn’t bleeding, so not quite sure what the deal is with the blood on the shirt. 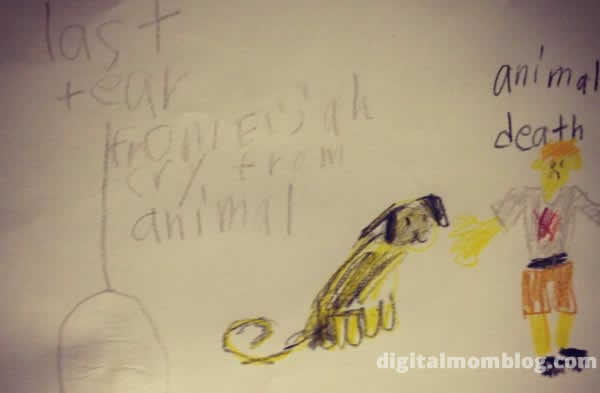 I made him take a photo with the dog. I told him to try to smile in this photo and whenever Animal did die, we could always look at it and remember how happy he made us. 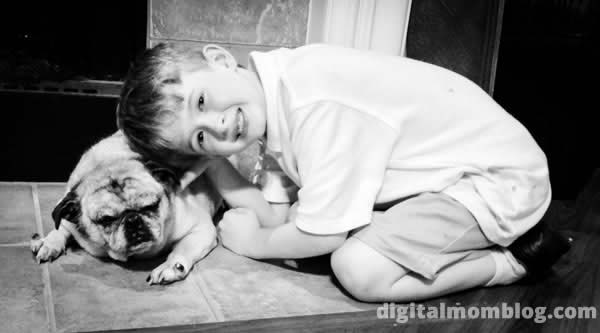 It’s been almost a week and when I sat down this morning to write for Babble about Izaiah’s questions – I thought to myself, wow – I’m doing pretty good. Then I started writing the post and I broke down several times. After concern, I told my daughter why I was crying. She thought it would cheer me up if she gave the toddlers the stuffed animals that are Pugs to play with so I could remember Animal. That just made me cry more. Then the day got worse. I was running out the front door this afternoon and our neighbor’s Pug that resembles Animal was in our yard. I screamed Animal, get over here – for a 10 second period of time I had thought Animal was alive and that he had gotten out of the backyard. Nope, Animal is gone all that is left is his fur in various corners of the house.

It’s amazing how much love a dog can bring. As sad as our dog’s death is – it was all worth it. That dog helped teach our toddlers and tweens responsibility and love. He was our furry child. He will forever be missed.

1 thought on “Our Dog Died: Talking About Death With Kids”