Have you ever wondered if Barbie was real – what she would be like? *sigh* I have a total love – hate relationship with Barbie. Before I had kids,

What if Barbie was a real person?I swore if I had a daughter that she wouldn’t play with her. Barbie represent everything that I loathe about beauty. The idea that someone has to be tall, blonde, thin with big boobs slays me. Why would I let my daughter play with such a toy? 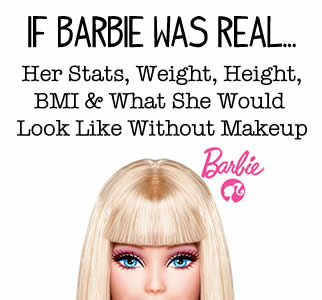 And then I had a daughter – an EXTREMELY girly daughter at that. I remember the first Barbie doll she received when she was 2. It was actually a Disney Princess doll the size of a Barbie.

Okay, that’s fine, it will pass. And then she turned 3 and it was if that was the default birthday gift for the next 7 years of her life.

My daughter recently turned 10 years old. She received 3 Barbies for her birthday.

She loves the doll and I made an agreement with myself that she could play with Barbies and I might actually buy her some (how cool is Photo Fashion Barbie!) if I constantly reminded her that Barbie is fine as a doll, but like cartoons is totally fake. So for the last 7 years, that’s what I’ve done.  Check out these details in regards to if Barbie were real…

If Barbie Was Real

Recently the internet has dissected the plastic doll and figured out exactly how fake Barbie really is. Check out these details if Barbie were actually a real person.

Huffington Post pulled these stats together also with the photo showing what a real life Barbie would look like.

Oh Barbie without makeup – you look so refreshing.